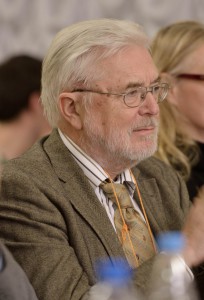 Born in 1940 in Görlitz, Germany. In 1961-1989 – member of the Deutsche Staatsoper/Staatskapelle Berlin. Since 1968 he has been teaching assignment at the Hochschule für Musik „Hanns Eisler“ in Berlin. In 1989/90 was a member of the Bayreuth Festival Orchestra. In 1991 had professorship at the Hochschule für Musik in Saarbrücken/Germany. Since 1994 he has been Professor at the University of Music in Munich. Has served as a jury member of the leading international competitions and as a leader of the master courses in Europe. Asia and USA. Has recordings for Broadcasting Companies and CDs. Mr.Trumpf is a Founder and President of the International Johann-Matthias-Sperger-society; Founder and Artistic Director of the International Johann-Matthias-Sperger-competition. In 1993 he got the „Scholarship-Award“ of the International Society of Bassists/USA for “Merits for the Contrabass”. In 1996 he founded the International Double Bass Ensemble BASSIONA AMOROSA, which now performs worldwide.